Don’t they sell katsuobushi in the UK?

Even though miso soup is well known across Europe, and nowadays you can buy basic Japanese flavourings and foods in almost every supermarket in the UK, it is extremely hard to find katsuobushi, or even dashi flavouring. The very basis of Japanese food is dashi – Japanese stock. So how on earth do people in Britain make their miso soup? What exactly is this worldwide Japanese food boom that is so talked about here in Japan? My head fills with questions…

The most popular kind of Japanese stock is katsuobushi dashi. It is made from cured bonito meat. Besides being used in dashi, shavings of katsuobushi – bonito flakes – are used as a topping for all kinds of dishes. Without a doubt, katsuobushi is one of the star players in Japanese food, loved by old and young alike.

To learn more about katsuobushi, I went to see Taizo Inaba, who runs a katsuobushi wholesale company in Tokyo. 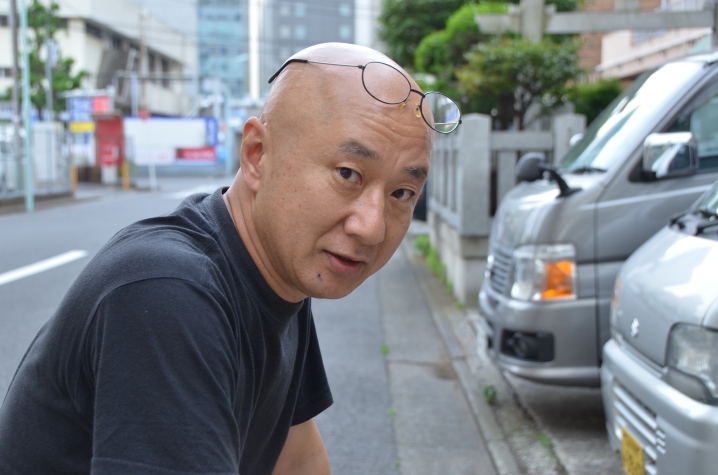 Maybe the best way to picture Inaba is to think first of a Cockney trader. A bit rough around the edges perhaps, but with a heart of gold, Taizo Inaba talks in a rich “Edokko” Tokyo accent, his eyes are as piercing as a kabuki actor’s and he has a natural way with words to match the best traditional rakugo storyteller.

His warehouse is at the Katsuobushi Centre in Harumi, a man-made island in Tokyo bay, just a short trip from the famous Tsukiji fish market. You know when you are getting close because the air suddenly fills with the delicious, rich smell of dried bonito. At first glance the building looks like a shabby block of flats, except the ground floor is lined with katsuobushi wholesalers, each the same size with the same grey, garage-style shutter doors, the same kind of van parked outside, and the same grey sign above the door. The only difference is the actual names on the signs – the one we want says “Taiko“.

Dashi became popular among ordinary folk in Japan’s long Edo period (1603-1868), when top quality konbu seaweed from Osaka, and dried bonito from Tokyo became available across the country. (In the Tokyo area of Kanto, katsuobushi dashi is still king, while in Kansai, around Osaka, it is konbu dashi.) Eventually the streets of the Kobunacho area of Nihonbashi, in central Tokyo, came to be lined with katsuobushi traders. One of them was the forerunner to Inaba’s present company, Taiko. Much later, in the 20th Century, most of the traders moved to the Katsuobishi Center in Harumi, where it is today. 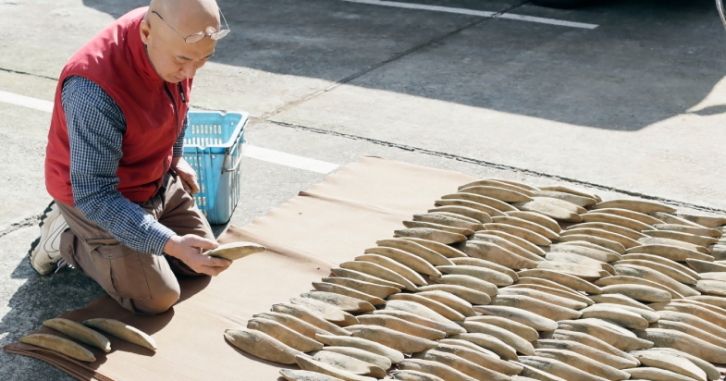 Most probably, Taizo Inaba has the best eye for katsuobushi in all of Japan (and hence, the world?). When I tell people about Inaba, I always introduce him as the guy who can tell you how a fish died just by looking at a piece of hard, cured katsuobushi. With a glance, he can tell you if the fish suffered when it was caught, how it spent its last moments alive, and if or how it was frozen. 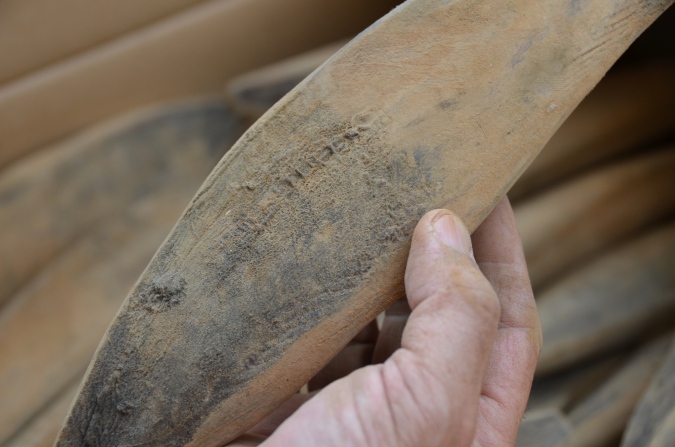 A bonito that has suffered tastes bad. Inaba explained the chemistry. The flesh of a living bonito contains ATP (adenosine triphosphate), which is the source of its energy. When the fish dies, the ATP changes to inosinic acid – which is the umami that makes it taste good. When bonito are caught in trawler nets they struggle violently to get out, and use up the ATP in their bodies, leaving little to turn into umami. And, because they are stressed, they also release lactic acid, which turns the meat sour. Currently 99% of bonito are caught in trawler nets, but Inaba buys only fish caught with the traditional, and more sustainable, rod-and-line method 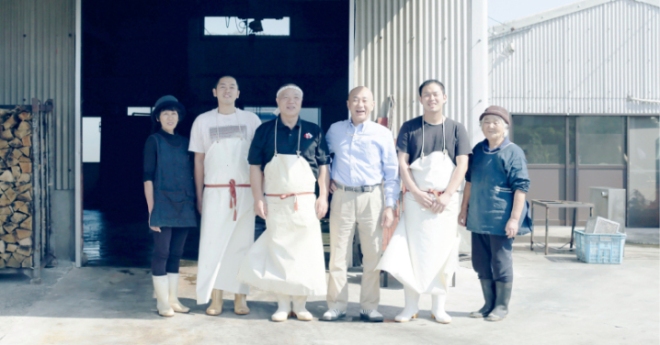 For 35 years, Inaba has trusted Makoto Miyashita and his 5 person family-run company to produce the katsuobushi he sells. “I might complain to Miyashita, but I never haggle with him. That way I can be sure he’ll do the best job he can.” Every month, Inaba buys every last piece of katsuobushi Miyashita has produced. He says the only two things needed to ensure Miyashita keeps producing the best quality katsuobushi possible are a fair assessment and a fair price. He firmly believes that is what allows everyone to work together in good faith, protects both the pride and livelihood of the manufacturer, and ensures that the next generation of craftsmen can carry on the tradition. 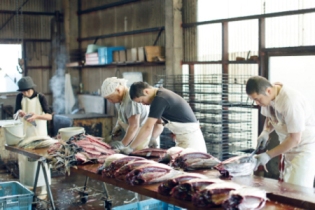 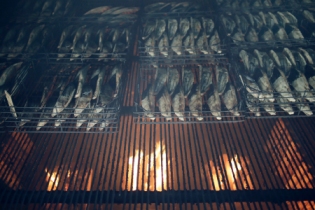 Each fish is filleted, boiled, boned, has its shape fixed as necessary, and is then dried over a wood fire. Next each one has the outer, burnt area removed, and is shaped once again. Then for a further 3 months it is sun-dried and, a bit like cheese, is coated with a kind of mould to prevent bacteria spreading. The whole process takes around 6 months, until finally the very best quality katsuobushi is sent from Makurazaki to Inaba’s warehouse in Tokyo. There, Inaba grades the katsuobushi and continues the sun-drying process, until finally it is ready to be sold. 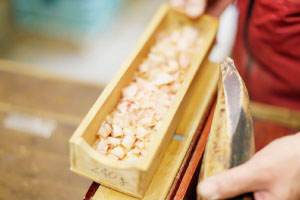 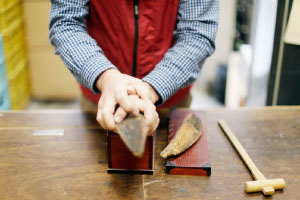 Every day, Inaba makes fresh dashi and miso soup for his employees. When I go to see him, instead of tea or coffee I am offered a cup of clear, hot dashi. The delicate, rich flavour is so good it leaves you begging for more. That taste, and Inaba’s passion, is unbeatable, although rare now even in Japan. Maybe though, just maybe, you might be able to get a taste of it in the UK too, some time soon….? 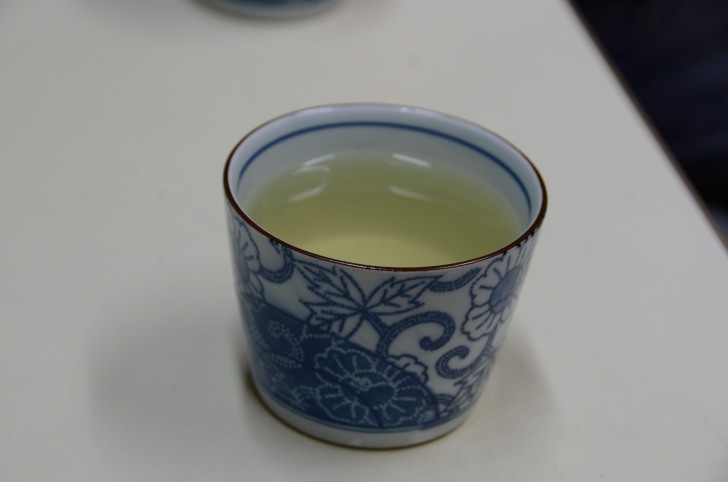